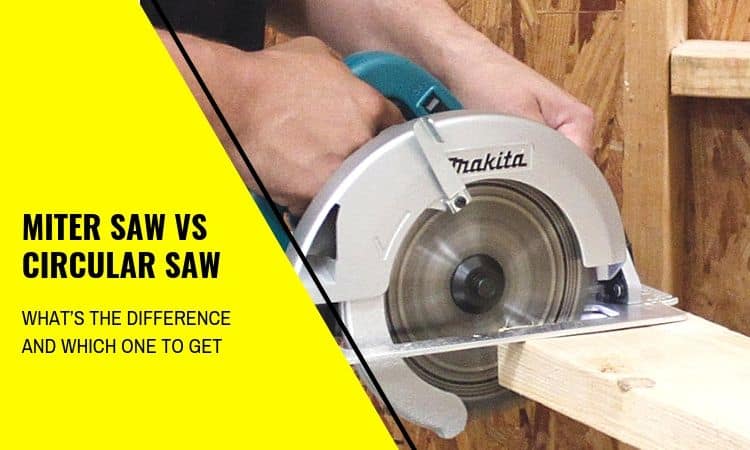 When you’re starting a new woodworking project, different resources will often list their own preferred saws. Some might call for the miter saw, others may recommend the circular saw. Deciding which one between a miter saw vs circular saw is right for you goes beyond suggestions; it depends upon a variety of factors and starts with knowing what each saw is actually capable of.

In order to simplify your selection process, we’ve put together a comparison between the Miter Saw vs Circular Saw to see which one is better.

Let’s take a look at each option and what it can do for you.

Being two of the most popular power tools, you might be used to seeing them in a woodworker’s workshop. That said, you certainly don’t need both if you’re just starting out. Each tool has its own specific advantages and limitations which you should be aware of.

The Main Differences Between Miter Saws vs Circular Saws are: 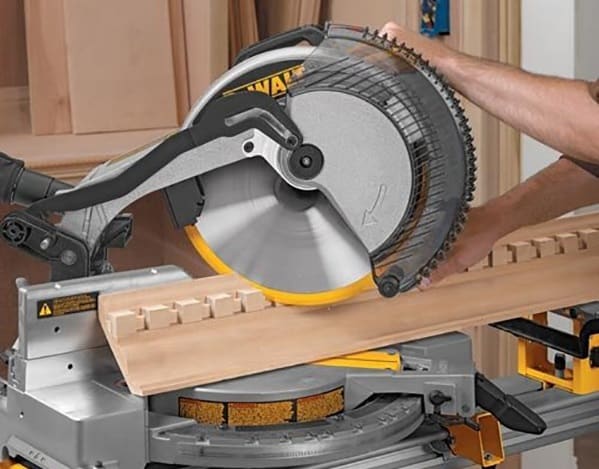 What is a Miter Saw?

A miter saw is a power saw with a specialized purpose: It is used for chopping wood at specific angles. Much like a circular saw, it has a circular blade which is used for making quick, precise cuts. However, it is a stationary machine which comes with a workstation and a small fence.

The miter blade is available in 8 to 12-inch sizes and is mounted on an arm which can swivel right and left to make various angles. The arm locks in place to allow accurate cutting. Using a miter saw, you can make cuts for crown moldings, picture or door frames, window casings, fence or cupboards, etc.

The four different types of cuts Miter saw can do

A cross-cut is the easiest one among the four cuts. This requires you to cut through the length of the board at a standard angle of 90 degrees.  If, for instance, you want to cut a 2 by 4 into two, a miter saw will help you to get an accurate cut.  You can equally achieve the same with other types of saws. So, cross cuts are not specific to only miter saws.

You get a miter cut by cutting an angle at board’s end.  You can find an example of a miter cut by looking at a trim on a door in your home. The angle where two trims run into each other is likely cut using a forty-five degree angled saw and fitted together.

A bevel cut equally cut the boards end into an angle. However, the angle made but a bevel cut passes across the thickness of the wood instead of through the width.  Shims and doorstops are examples of bevel cuts.

A compound cut combines a miter cut with a bevel cut.  You will find an example of a compound cut by looking at the angle of a crown molding in your home if you have one. The compound cut is likely used for those trims to ensure they fit together nicely in the corner.

By setting the depth of each cut, you can further customize your wood according to your preferences to make trims in addition to joints and moldings. It will help you get the perfect fit every time.

That said, there are some limitations.

The miter saw is ultimately a stationary saw with a structural built. Therefore, materials have to be brought to the blade, limiting you to four types of cuts only. Additionally, it does take up space depending on which blade diameter you’ve chosen to go with.

Lastly, due to its specified nature and additional controls, it is more costly than other options out there. 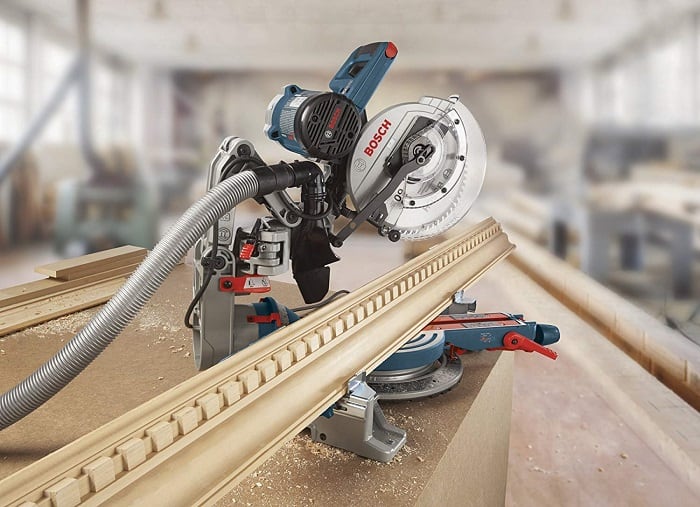 Features of A Miter Saw

The miter saw produces precise miter, cross and bevel cuts. Unlike the circular saw you don’t require any guide to get an accurate measurement. All you need to do is to adjust the saw to the appropriate angle.

Miter saw works great when you want to cut a few tight fitted junctures for moldings. It can equally provide an accurate cut for door or window trims. Similarly, a miter saw provides accurate cuts through baseboards and crowns.

You can achieve the result you want with a miter saw without having to gauge and measure the material. Whether you want to create any of the four types of cuts or you want to install trims in your house or create picture frames, the task would be a lot easier and faster with the use of a miter saw.

You can make broader cuts with a miter saw. This way you save a lot of time because miter saw makes cutting big boards a lot simpler.  Besides, with the automated blade especially while using the compound miter saw, cutting with a miter saw is speedy. It helps you to slice through the workpiece very fast.

It is particularly structured for creating angled and beveled cuts. Although the miter saw is less versatile than the miter saw, it works efficiently when you need to provide bevel, compound, and crosscuts. Many types of miter saw would easily produce any of these cuts.

Unlike the circular saw which is prone to cuts a miter saw is safer. The blade only moves in an upward and downward direction within the range of the arm where is set up.

You rarely get kickback with this saw and in so far as you put on your safety goggles, your greatest worry would not be the saw mistakenly cutting away your fingers. If that happens, you can release the blade which would eject it away from your hands and the blade rotation would stop.

Miter saws are not as versatile as the circular saw, owing to the fact that they are immobile. You basically carry the material that you want to cut to the place where it is mounted. This minimizes the numbers of different types of cuts you can achieve with a miter saw.

The key benefits of a miter saw, the ability to create all the four types of cut with ease equally come with a disadvantage. It basically does these types of cuts and no more than that. So, it just cuts what it is designed for and produces no further types of cuts outside that what it is meant for.

A lot of tools would do more than what they are designed for but the situation is different with a miter saw. You cannot split boards with a miter saw. It can’t also tear through large pieces of wood. All it can let you do is create straight-line cuts.

Miter saws are costly compared to circular saws. Because a miter saw can cut the four different types of cut, it is termed a special tool and the cost means you are paying extra for its handy cuts.

Miter saw is not a regular tool found in most workshops and garages A miter saw can cost three times the price of a circular saw and more.

Because miter saws are immobile, you have to dedicate some workshop space for them. If you’re running a small woodwork workshop it may not be handy as it would use up a significant amount of space.

Their stationery design requires you to take the wood you want to cut to them. There are a few tabletop models that are transferable. However, they are not handhelds tools that you can take from one room to the other.

DEWALT DW715 Miter Saw
If you are on a limited budget, a great miter saw for the money is the DeWalt DW715. This highly impressive tool is not only the most economical on this list of the best miter saws on the market.
Buy Now Learn More
We earn a commission if you click this link and make a purchase at no additional cost to you.

The DeWalt DWS780 is a typical model of miter saw with all the features of a miter saw. It comes in a 12-inch blade, double bevel functionality, and gliding capacity which improves its versatility up to an optimal cut range of 13 inches.

This is one of the best miters saw you can find in the market. It is a bit costly though. However, if you want a cheaper model, you can get the Dewalt miter saw model with one bevel feature.

This Makita double bevel miter saw is a very attractive piece that is sure to capture your admiration.  Despite the unique appeal that comes with this miter saw, it equally comes in with a better design and performance.

Although it is a bit on the high side, it comes with more than sufficient. It is one of the best Miter saws. If you want a bigger version of the saw, you can equally get a similar model but with a 12-inch measurement.